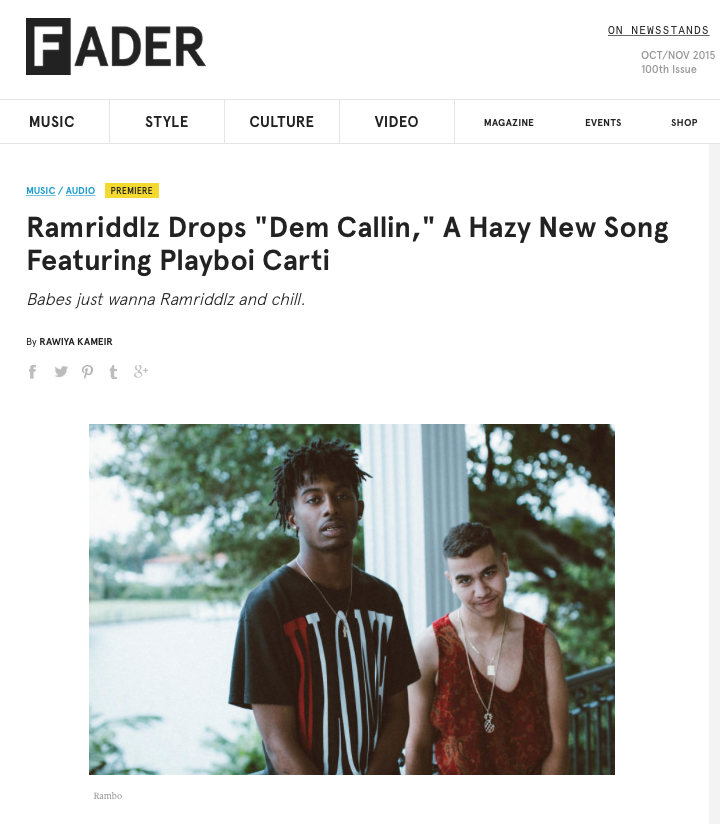 It’s been quite a year of transition for Ramriddlz, the Mississauga singer who first came to prominence with the spring one-off “Sweeterman.”Something like eight months since that drop, he’s embarked on a new wave, linking up with OVO and playing shows across the U.S. and Canada. Finally, he’s releasing his first piece of new music since this summer’s P2P EP. The track, produced by frequent collaborators Jaegen and C.P Dubb, features a verse from new friend Playboi Carti. Over a characteristically slow-burning beat that sounds like the post-Hennessy slump he sings of, Ram delivers some of his most memorable one-liners to-date: Babes just wanna Ramriddlz and chill; Eating good, call me Uncle Phil; Everything halal so no pepperoni. We’re crying.

“I’ve been out in L.A. for the past couple months working on my next project and did a few appearances and show. At one show, Playboi Carti was also there. We kicked it off and vibed with each other. Brought him over to a studio where I record at, Jaegen cooked up a beat and C.P Dubb threw his touch on it. With all the drugs and drinks being passed around, the idea of being fucked up and have bitches ringing up our phones too often became the song itself,” Ramriddlz told The FADER over email. “Ring ring for the dingaling,” he added.