On her new single, Izzy explains, “‘Lights On’ is about throwing caution to the wind and going with what you feel rather than what you think (or what you think other people will think). It’s about growing up and losing your inhibitions, but there is a loss of innocence in that and it can be easy to lose your way”.

Nick Murphy, formerly known as Chet Faker, has released his new album Run Fast Sleep Naked. The album was made over four years of living a nomadic lifestyle, traveling the world for shows and inspiration. He made music in various places like his New York apartment, a Tokyo studio, his grandmother’s living room and a rental in New Zealand.

The first thing you notice on this album is Murphy’s voice that has been a constant over his musical evolution from Chet Faker to Nick Murphy. He doesn’t just use the yearning, soulful voice, but imbues some other vocal patterns with Americana on “Henry Takes Drugs On The Weekend” or the wailing grungy feeling on “Sunlight.”

Izzy Bizu‘s Glita EP, her first official release in over three years, is available now worldwide via RED MUSIC/Sony Music UK. Izzy also shares the late night video for lead single “Lights On,” which she explains is “about throwing caution to the wind and going with what you feel rather than what you think.”

As well as five brand new tracks including “Lights On,” Bizu’s Glita EP also features a reworking of the previously released “Someone That Loves You,” featuring none other than Coldplay’s Chris Martin. The two artists met in 2017 when Izzy supported Coldplay on their North American tour and found themselves to be creative kindred spirits, re-recording this song featuring Chris’ unmistakable vocals.

Read the full article at broadwayworld

EP TRACKLIST:
-This Is What We Wanted

-Someone That Loves you ’19

UK songstress Izzy Bizu today releases her new single “Lights On,” the lead track from her brand new EP Glita, which is due for release on April 12th.  Her first official release since that of her hugely well received debut album A Moment of Madness in 2016, which has now clocked up over 230 million streams internationally, Glita sees Bizu take an assured step forward into what’s set to be a huge 2019 for one of the most exciting artists of recent times.

On her new single, Izzy explains, “‘Lights On’ is about throwing caution to the wind and going with what you feel rather than what you think (or what you think other people will think). It’s about growing up and losing your inhibitions, but there is a loss of innocence in that and it can be easy to lose your way”.

As well as five brand new tracks including “Lights On,” Bizu’s Glita EP also features a reworking of the previously released “Someone That Loves You,” featuring none other than Coldplay’s Chris Martin. The two artists met in 2017 when Izzy supported Coldplay on their North American tour and found themselves to be creative kindred spirits, re-recording this song featuring Chris’ unmistakable vocals. He also joined Izzy at an intimate solo show in Miami to perform the song live.

Glita EP tracklist:
1. This is What We Wanted
2. Doorstep
3. Never With It
4. Lights On
5. Someone That Loves You

Gaining a lot of recognition and status from his latest released album “LOW”, Kossisko will be joining electro-pop singer, Terror JR in her 2019 tour, “Unfortunately, The Tour.” 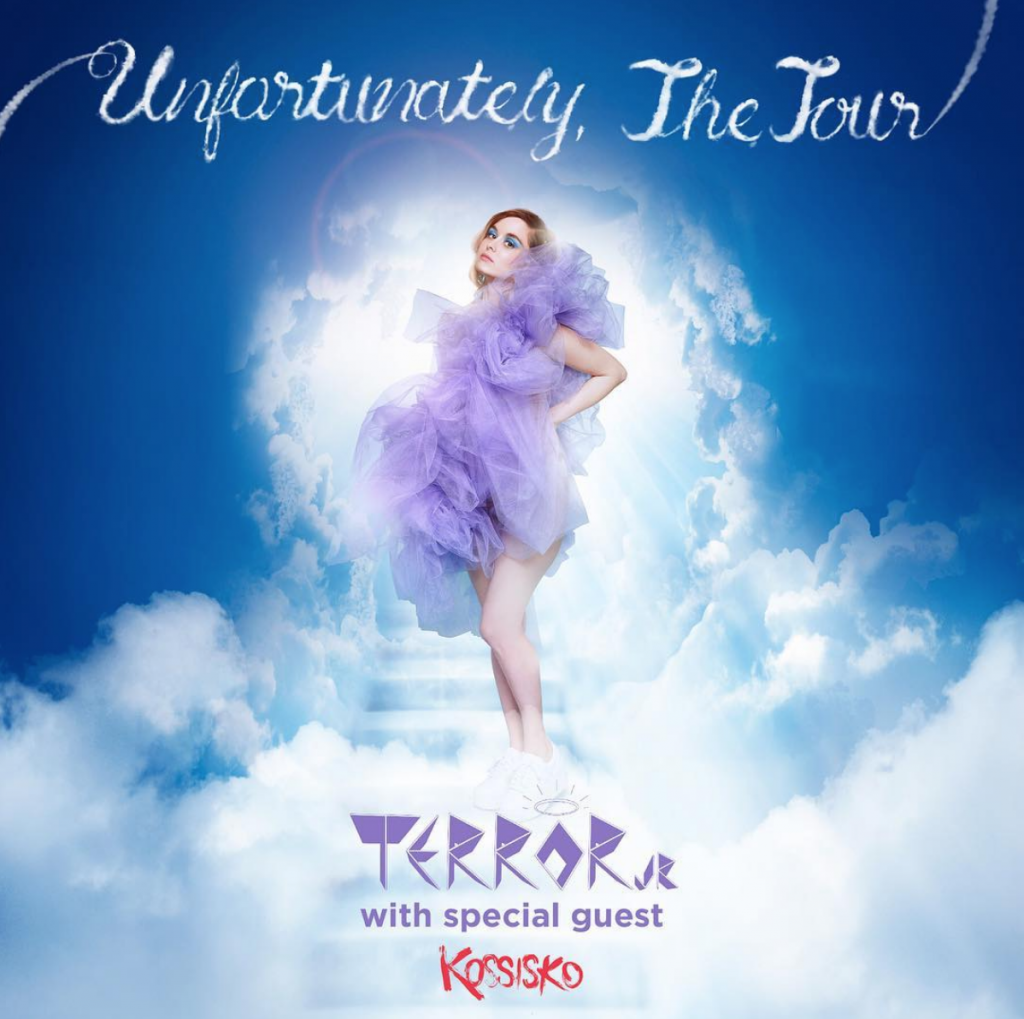 Read the entire article written by Abraham Martinez on lofficielusa

We all know that great music speaks to whatever’s going in the world, be it war, famine, or our obsession with technology (and the way it seems to always connect us to the past). When it comes to the latter, “Cell” the lead single from model/musician Miles Garber, producer/engineer Frank Tatick, and Nick Long (King Princess, Anna of the North, Bebe, and Bjorns)—of Fukushima Daisies—hits the nail on the head.

From start to finish, the track takes you on an introspective journey littered with nostalgia and passion. It’s perfect anthem for swaying around when flooded with memories that involve past flames. It’s a vast departure from the autotuned cacophonies that plague radio airwaves; the spirit of alt-rock lives on! 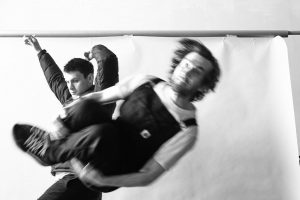 Of the song, the group says it was it’s about the moment when you realize that the thing you’ve been convinced is hurting you, is the only thing that was helping. Combine that feeling with electric guitars, pounding drums, ghostlike piano riffs, and lyrics like “You opened your door when all my bridges were burning,” and you have yourself a top-of-the-line teenage angst anthem coated in glorious falsetto.

Enough chit-chat, though. Listen to “Cell” now across all streaming platforms. And, if you want more Fukushima Daisies and plan on being in the Highland Park/Los Angeles area on March 28, the band is hosting a special party at Blind Barber. Simply DM the group (@fukushimadaisies) for an invite on Instagram, and voila! You’re in.

Nick Murphy is ready with the follow-up to his 2014 debut, Built on Glass, which was released under his former Chet Faker moniker, and his most recent effort, 2017’s Missing Link EP. Titled Run Fast Sleep Naked, the full-length album is due out on April 26th via Downtown Records. Paired with the announcement, the Australian producer and musician has released a music video for the sophomore LP’s lead single, “Sanity”.

Co-produced by Dave Harrington, the vocals for the collection were captured all around the world during the last four years. For the record, Murphy found “spaces and environments that most inspired him,” ranging from his grandmother’s living room to a studio in Tokyo to a New Zealand rental home while on vacation with his family. During this period, the musician began a process of intense self-examination, using Joseph Campbell’s writings to question his role as an artist in modern society. The instrumentation for the album was later recorded at Brooklyn, New York’s Figure 8 with help from over 15 musicians and a full orchestra.

As Murphy explained in a statement,

“It’s almost like I was finding different shapes and colors from around the world, and then bringing them back and putting them all together… If you sit in one space for a long period of time, you get settled and stop experiencing the world in a new way… There’s a kind of power in leaping into the void without set structures and systems in place… At some point I realized there was a path I could continue on where I could put things forward as a way to boost myself up, or as a gain to my ego, but that’s not true to the whole purpose and role of the artist.”

Murphy has also released Run Fast Sleep Naked’s lead single, “Sanity”, which was written at Rick Rubin’s Shangri-La studio. The feel-good track highlights the singer’s soulful vocals and creates a syncopated beat with upbeat piano riffs and crisp backing harmonies. Watch its new music video, which was filmed on the Canary Islands and directed by BabyBaby, below. 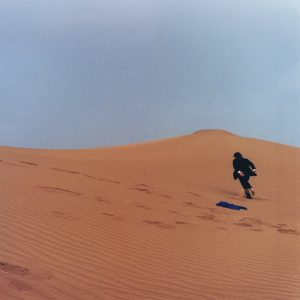 Rainy Milo, Singer/Songwriter from London shares her Short Story with Urban Outfitters explaining her routine and rituals before her performances. In the video below, Rainy can be heard singing an unreleased song, “Fool”, and her most recent single “Hope & Glory.” In conjunction with the Short Stories series, Rainy will also be hosting an Urban Outfitters event on March 2, 2019 at their Santa Monica Third Street Promenade location. 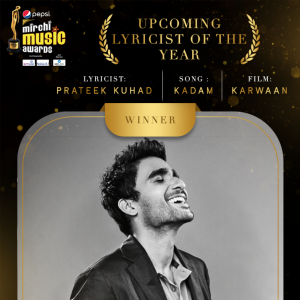 Kossisko’s official music video to, “Superficial” is out with a new aesthetics that is sure to grab  the attention of a wider audience of music enthusiast and sure to please. Watch the music video here and click the image below.. 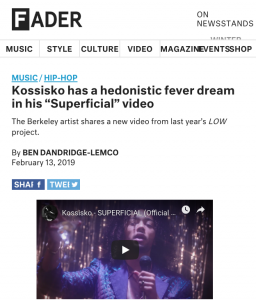